Two months and two days. That is insane. So has been our lives. Starting with the computer virus, things have been crazed around here.

The boy is not only all over like one of those super bouncy balls (which is exhausting to watch) and he has had lotsa tummy issues. Not to be tacky, but my beans were either shampooing the "mess" out of the carpet (thru his pants) or nothing for a week. He was crabalicious for sure. Now he is on Miralax and we're hoping things level out. He's also had more reflux flair ups and that has made getting him to eat or sleep hard too.

Thru all this, we also got mice, and...roaches! eeeeeeeeeeeeeew. I mean, I'm all for killing bugs for fun, but those things are nasty. My mom was ready to take me and the stinky boy and leave home. Luckily things seem under control now. They were "wood roaches" that are supposed to be in trees and not the really bad ones, but still.  My mommy keeps saying "we're clean, we don't leave nasty stuff out, we're clean." I say, check my litter box and you won't be able to say that.

The bug spray dude said with all the rain we've had and our walk out basement along with the woods right behind our house, we just created a perfect storm. The mice apparently came in to the garage for the grass seed and slipped into a hole and wound up in the basement Mancave! We never saw them in the rest of the house, but I wasn't allowed in the basement for 3 weeks while the traps were set. Nothing was caught so they're hoping they were gone even before the pest dude came out.

I was bummed I didn't get to see (ahem eat) one, but we've been locking the basement door at night due to break ins in the area. Mommy said I'm lucky I didn't eat one cause it could have made me sick. I think it would have been nice to play with one though...


My beans have also been trying since last May to have another blurpy thing (why I have nooooooooooooo idea). They got kinda lucky last October but that glimmer left us in December 2011. No luck since and since this month marks a year, mommy has been bummed. So basically, she  has been a b*tch on wheels from worry and lack of sleep.

We've had some good hang out time, but it's been hard for her to be "expressive" with both my blog and even with her scrapbooking. She's been reading a lot, which works out for me cause I get lap time.

All isn't downer stuff of course. Mommy still loves her job and it is going well. She put in her vegetable garden, expanded the bird and butterfly garden and added annuals in pots for more hunmmingbirds. She has already dehydrated some fresh nip leaves from MY very own nip plant to store for me. 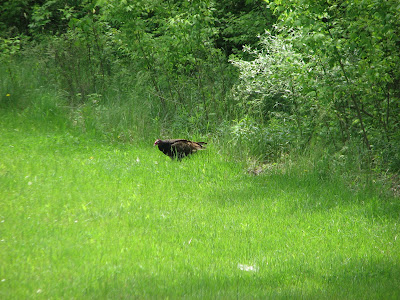 This is the turkey vulture kept mommy company while she planted and dragged a dead squirrel across the yard, pausing only to eat it, until they both disappeared into the woods. It kept looking at mommy working in the garden like she was going to try and take it away. She said, dude, it's yours, but the bird didn't believe her.

Daddy got a new position at his work that means more green papers and he doesn't have to work so late at night. That has been nice cause we really missed him. He is doing really well at it too.

Joel aka Tole has been a typical almost three year old. I've become his new best friend and favorite toy. Seriously. Seriously. He isn't the most coordinated kid and hugs have a tendancy to flatten me. Mommy has pulled "stunt double" kitty out, but stinky boy (and with his tummy issues I can't stress that nickname enough) isn't falling for it. We have found mutual affection over music though. Daddy's old keyboard! 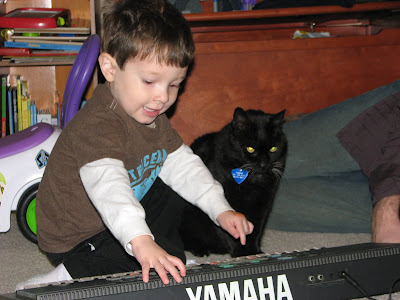 Mommy has decided it is time to come out of her funk and get back to what is important in life.

We are so so so sad to hear Perfectly Parker will be going to the Bridge tomorrow. She was one of our earliest friends on the blogosphere and has a special place in our hearts. Her family will dearly miss her.
Posted by Mr. Hendrix 101 comments: