I don't care if it is a squillion degrees outside and muggy. OPEN THE BLINDS! 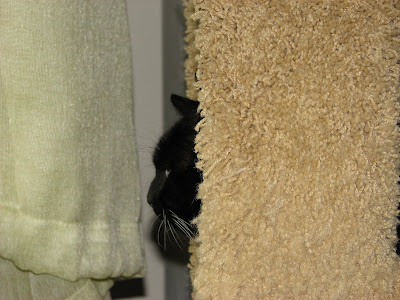 First you move my command post to the other window which does not overlook the bird feeder pole (but does overlook the squrrel feeding area) then you keep the blinds closed more than half the day. Totally uncool woman. I'm thinking a whap in the face at 3am is in order....
Posted by Mr. Hendrix 19 comments:

I'll tell you what, there is a big bonus to that stinky boy being around. More food for me!! 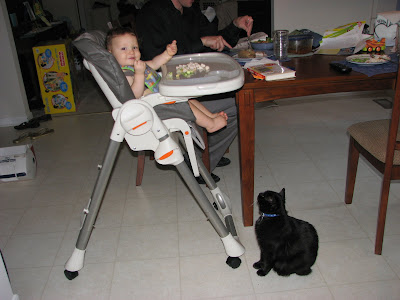 That is right, I have a special spot I patrol whenever it is time for him to eat. I am always rewarded. 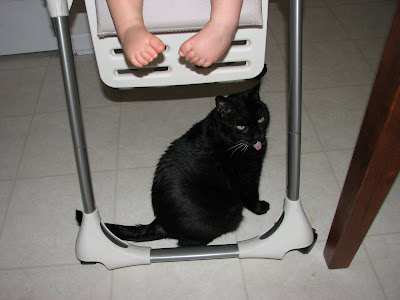 I do have to be careful to watch for shrapnel though. 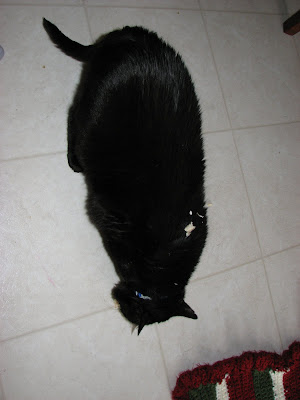 Ham, chicken, eggs, cheese. It is raining food at my house! Good thing my appetite came back!

Guess what that Joel started doing...Walking! I jinxed myself last week and on Sat. the 17th he took 7 steps and hasn't slowed down since. I'd better watch my waistline or I won't be able to outrun him!
Posted by Mr. Hendrix 24 comments:

I'm thinking that stunt doubles should be paid more. 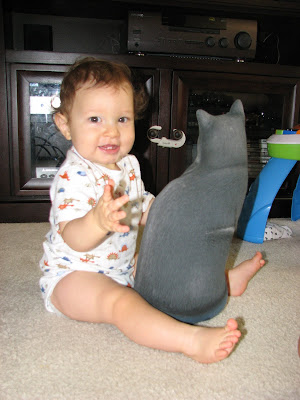 Mine doesn't actually get paid anything. He is what mommy uses to teach Joel "gentle with the kitty" 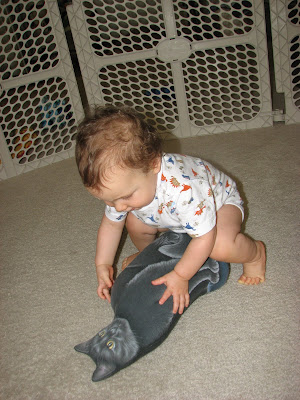 I'll just hang up here out of reach. 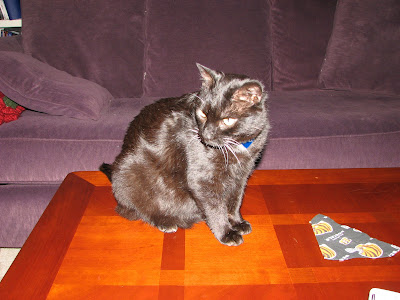 I'm feeling lots better. Purring and playing like my old self. Now we just have to make sure it stays this way and I don't start going downhill again. Cross your paws it was just a fluke brought on by to much stress! Thanks for all your nice thoughts. purrrrrrs
Posted by Mr. Hendrix 26 comments:

Labels: Bendrix is going to wake up sooooooore, Stunt doubles have it rough, Thinking on Thursday

Monday Monday No Trusting It

UPDATE: I'm home! Finally. We hope everything is OK, there is no definite diagnosis right now. I am slightly anemic and my lymph nodes are swollen. I got 2 vitamin shots to help me with my anemia and stimulate my appitite. Also, a shot to help with pain from the swelling. Hopefully this will work and I'll be back to normal right away and not have to go back. Cross paws I keep getting better!

Mommy is sending stinky boy to the sitter tomorrow so we can have a relaxing quiet day. That sounds like just what I need.

Here is a picture of me letting Joel pet me (no worries, daddy was right next to him keeping watch) on his birthday. I got lots of lovin' because of this behavior. 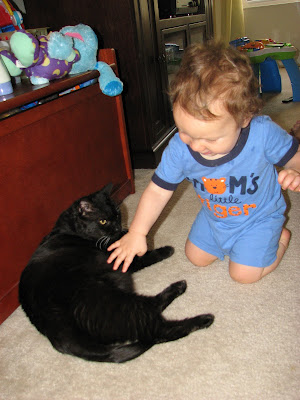 Thanks everyone who came to my party! I hope you had as much fun as I did. Max's primo nip had me flying and all those gift bags and tissue paper made for awesome wrestling and tearing time.

Mommy had no idea what happened to the shelves in Joel's room! Thanks for the help whapping stuff Grete! ha ha ha My beans couldn't figure out where the extra furs came from. I'm not talking! 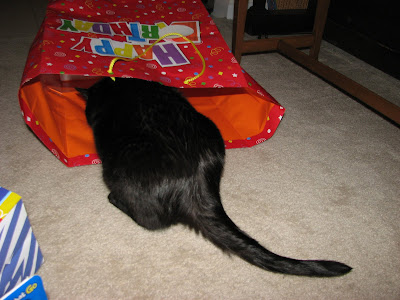 I did continue the party by hiding in a bag yesterday. Which leads me to this morning. I haven't been myself and usually if mommy spreads gift bags and tissue paper around like she did yesterday, I go bonkers. I had a VET appnt scheduled for today anyway, so mommy figured she'd mention it then. She wasn't really worried.

Then this morning when she tried to put me in the carrier, I went crazy. I slashed her arm and hissed, growled and tried to bite her hard. I've never done that to her before. VET Techs yes, mommy no. So mommy thinks I must be in pain.

I'm under the gas as mommy types this. The mice in pink tutus have been by to say "Howdy" so at least I'm not freaking out.

The decided to keep me at the VET while they run some blood tests and stuff on me. Mommy hopes it is nothing, just stress from having so much going on, but any purrs you can send my way would be appreciated.
Posted by Mr. Hendrix 19 comments:

Labels: I hate being at the VET, Mondy Monday can't trust that day

**duh, this should have posted for Saturday, July 10th)
It is hard to believe that our little #2, Blurpy Boy, Munchasaurus, Chubs, Stinky Boy, Turdmeister, Pooter aka Baby Joel is one year old today. Wow. Here is a walk down memory lane. 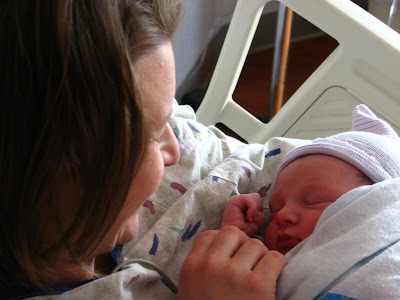 Here is the very first time I saw Joel close up. He was 3 days old. I thought mommy gave birth to the stoopidest kitten alive. I'm still not sure I'm wrong. After all, he is a year old now right? No walking yet. I mean, I'm cool with it, he doesn't need to be any more mobile than he is, but kittens walk at what? 2 weeks? 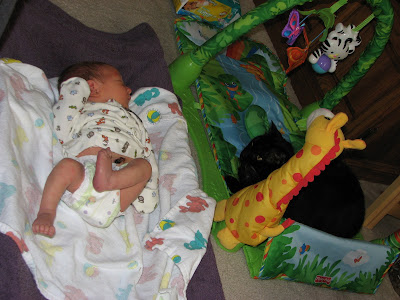 Joel and I meet for the first time 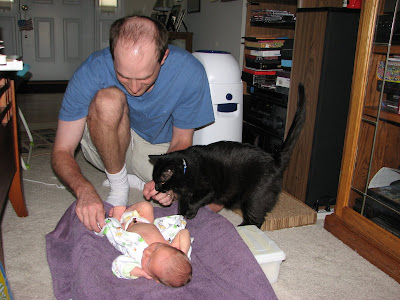 Learning a very valuable lesson about location and timing

I am a good House Panther. I pay attention to stuff. I know what is going on. But still, I have no idea when that little squishy blurpy turned into this. 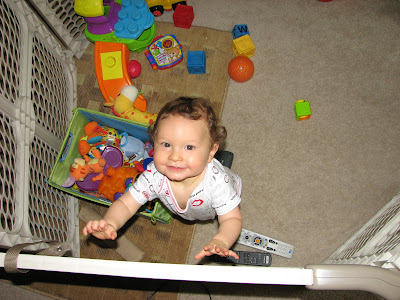 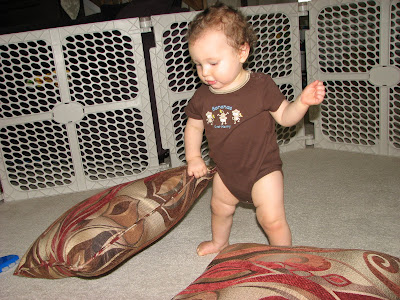 Happy birthday Chubs. I came into the cage area so you can pet me. Mommy said cause I was so nice, extra special treats for me!!! 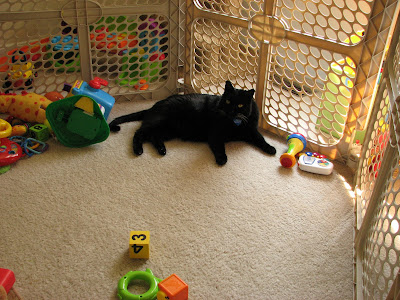 My beans are having a party for him later, but we plan on spending the early part of the day relaxing as a family. I like that idea...as long as Joel is an arm's length away! ha ha ha

Happy Birthday Blurpy Boy. You're growing on me for sure.

Since my beans are having their party, I think we should have one too. We've got the whole upstairs. It is all gated off from sticky little beans and all the grown up beans will be drooling over #2 and won't pay attention to any messes we make...until it is too late. I've got extra treats and fresh organic catnip plants. Also tons of climbing and sleeping areas. We could knock all the stuffed animals and books off Joel's shelves too! whoo hoo! Come on over!
Posted by Mr. Hendrix 20 comments:

Labels: Happy First Birthday Baby Joel, You're growing on me

I'm thinking I don't care if that stinky boy's birthday party is Saturday. I haven't recovered from the boomies and crashes over the weekend and you trap me with the big a*s carpet shampooer!?! What the frig are you thinking woman? 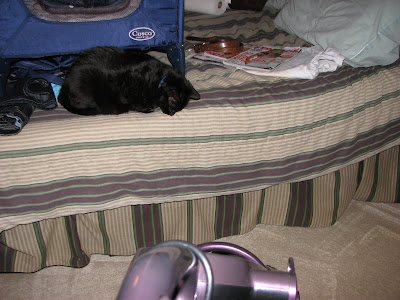 Although, having the soft baby cage on the bed gave me a stealthy spying & hunting spot. Hey little birdies birdies birdies. No House Panthers here... 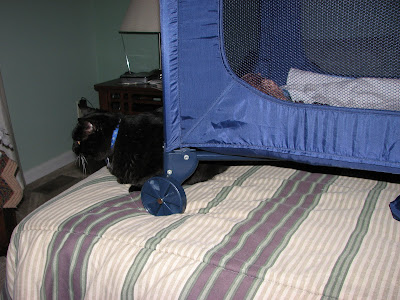 Oh, say can you see by the dawn's early light
What so proudly we hailed at the twilight's last gleaming?
Whose broad stripes and bright stars thru the perilous fight,
O'er the ramparts we watched were so gallantly streaming?
And the rocket's red glare, the bombs bursting in air,
Gave proof through the night that our flag was still there.
Oh, say does that star-spangled banner yet wave
O'er the land of the free and the home of the brave?

On the shore, dimly seen through the mists of the deep,
Where the foe's haughty host in dread silence reposes,
What is that which the breeze, o'er the towering steep,
As it fitfully blows, half conceals, half discloses?
Now it catches the gleam of the morning's first beam,
In full glory reflected now shines in the stream:
'Tis the star-spangled banner! Oh long may it wave
O'er the land of the free and the home of the brave!

And where is that band who so vauntingly swore
That the havoc of war and the battle's confusion,
A home and a country should leave us no more!
Their blood has washed out their foul footsteps' pollution.
No refuge could save the hireling and slave
From the terror of flight, or the gloom of the grave:
And the star-spangled banner in triumph doth wave
O'er the land of the free and the home of the brave!

Oh! thus be it ever, when freemen shall stand
Between their loved home and the war's desolation!
Blest with victory and peace, may the heav'n rescued land
Praise the Power that hath made and preserved us a nation.
Then conquer we must, when our cause it is just,
And this be our motto: "In God is our trust."
And the star-spangled banner in triumph shall wave
O'er the land of the free and the home of the brave!

Freedom isn't free and we are thankful every day for it! Be sure to do something to honor those "traitors" of the American Revolution who founded our great country.

Stay safe from the boomies and noise these next couple of nights. I'll be spending them in the Mancave or under the coffee table.
Posted by Mr. Hendrix 14 comments: