I knew it. Between the stuff in those diapers, the ear piercing screams, the constant noises he makes, the "I will NOT nap" attitude.

Joel has an evil alter ego too. His name is..."Tole" for the toll his is taking on all of us. The doctors can say it is "acid reflux" and give him medicine, but I know his plan. It is to make us so tired will bend to his every whem. By the time he starts actually moving and can cause real damage, we'll be so wiped out he'll have the run of the house.

Mommy and daddy have not recognized the evil alter ego of this 10lb 7oz creature, but I have. Here is a rare glimpse of Tole peering out from that adorable Joel face. Normally he hides behind the eyes. Don't look directly into his eyes man, you'll be lost. 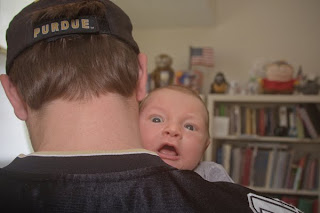 Bendrix is looking forward to them teaming up. Bendrix has already been on the piano, table, counter and put his claws into the sofa right next to where mommy was sitting.


Derby pointed out another freaky thing in my comments from my freaky Friday post. The Bengals beat the Patriots! Then we realized that the Reds beat San Francisco. The Bengals AND the Reds both one on the same night. Chuck Norris hasn't found me (yet). So, my mommy bought a lottery ticket. I'm crossing my paws.
Posted by Mr. Hendrix

I-yi-yi!! That is not an adorable baby face -- that is pure evil! Heaven help you all...

Poor Joel, being taken over by Toel

Oh uh... I hear the devil in human babies can be ever more frustrating than the alter egos of kits! Keep an eye on that

We see him... we see him in there! If you need a place to hide out, Hendrix, you know where to find us...

Tole, eh? I know that he and Bendrix will be a hard team to beat!

I will be wearing dark glasses next time I look at him. He is not to be trusted.

Joel and Tole are very cute!!

Uh oh!! Bendrix and Tole are going to take over!
But you know what, I can still see the sweet baby that Tole is, just the way that I can see what a sweet kitty Bendrix is!!
xo

UhhOH...poor baby Joel unfortunately he is being overtaken by his evil twin Toel...but I bet Joel will win out! Just hang tough Mr. Hendrix it'll turn out well you wait.

We tried real hard not to look into Tole's eyes...we think we are lost...

The look in "Tole's" eyes is remarkably similar to the expression in Harley's eyes!

Eeeeek, Tole looks pretty scary. We fear for your household...

(Haha, we kinda like Cory's backhanded suggestion of Troll... MOL)

Dude, I shure hope fings get better cuz, like, our boy is 14 years old an STILL has sum kinda alien inside hims.
You asked if I touch Nina an then say, "I'm not touchin you!" Wul, no, but I do try the yawn an stretch moof. I's so cashual bout it. Lookie here: http://www.flickr.com/photos/lambj/3849666876/

This is Tabbymom Jen. Has anyone considered Joel might have gluten intolerance, aka Celiac disease? Just a thought. That or another food allergy could make you all pretty miserable.
Hugs and hopes for a good night's sleep!
Jen

You are so right, Hendrix. They show that cute, adorable face to the hoomans, and then, when their back are turned, urp up on somethin' and try to blame it on us..I've seen it all before, dood.

Oh Hendrix, you always make us laugh. We desperately needed a laugh today too.

Thank you so much for posting about our dear Nicky on the CB. We are at such a loss right now its hard to even get through the day... thank you for your purrs and prayers.

Love
jaime
(and theodore and sasha too)
(and jaime's mom too)

Oh my.... this is frightening. Oh my gosh ... who knew that such a lightweight (10 pounds pffft) could cause so much upheaval!
I think your house is going for a New House Order and Tole and Bendrix are going to be in control of all of you

what an evil face! LOOK OUT HENDRIX!

OMG, I'M DEAF NOW BECAUSE MY MOM WENT ALL MENTAL OVER THAT "CUTE LITTLE BEBEH!" Clearly she has been fooled!

It kinda scairts me to think of Tole and Bendrix teamin' up.

Wow he and Bendrix will be unstoppable. This is very scary.

I'm glad my OTW doesn't plan on bringing any home. She'd say your mommy could have her share, but she has friends who just had their NINTH and she's pretty sure they've scooped her share of baby's already. And maybe several other people's too!

They WERE bloody claw marks! And yeah! No stoopid nicknames! "Mr. Kitty Mcphearson Squishy Face Head"? Really? So your mom-person's ALWAYS been like that? Weird beans.

But...can *I* still call the little goodie-four-paws Princess Pudgie-butt? 'Cause she hates it almost as much as I do! And I like teasing her!

The stuff in the diapers would do us in! Poor little man!

Tracy here. That poor litle tyke. I wa a colicky baby and put my mother and grandmother through agony.Sometimes, with any intestinal problem, changing the feeding position of the baby may help. For example, holding him in a half-sitting position. You might want to ask your pediatricion or lactation consultant about it.It could be necessary to pump and bottle-feed,also. Since swallowing air makes things worse, I had to have a pacifier at all times. My mother hated them,but it helped.

Thanks for helping us celebrate our 2nd Blogoversary :)

WOW!!!!!!!!!!!
Bendrix and Tole!!! That would be mayhem for sure ;) heh,heh,heh
Sounds like an exciting time at your place. Mom could not help herself! She looked into Tole's eyes...and smiled :o
Purrs Mickey,Georgia & Tillie

Uh oh. I think Tole may rule the world! What a face! If Tole and Bendrix do team up, we are all in trouble.

No talking about the Reds & Giants game!!!!

Good plan your baby bro has to wear the folks down. That acid reflux has to be painful! Hope the medicine works really fast.

Oops, I looked directly into his eyes...What happens next?

That picture is a little skeery.....hope Tole uh, Joel is not too much of a handful!
--JB

Joel will grow up to be very smart and energetic. Cute picture!

Check out my blog about a colony of abandoned/feral cats near my home. There will be stories there as time goes on that could inspire and inform anyone you know who wants to help homeless cats.

Stopping by to let you know we have an award for you today.

Yike, that is not a Bein we want around here! But The Big Thing went "oh so nice and it will grow up out of the blurbs". So mebbe we dont know.

Hi Mr. HEndrix....I finks we'z needs to get together. Our baby kitten bean getts fussie when she gets sleepy or hungry. Although our kitten bean shares her snuggly blankies with me, well.. if our meowmzie will let her.
Purrss..Siamia

Oh, oh, Joel does look like a live wire! and has an alter ego already.