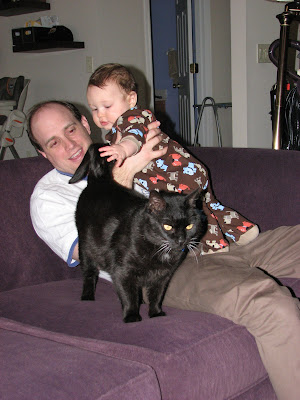 Bendrix's new favorite game is tempting #2 aka Joel. He gets as close as possible with our beautiful tail without being in reach. I'm concerned that "Tole" will pop out without warning and disaster will strike. Bendrix tells me to stop being a wuss. 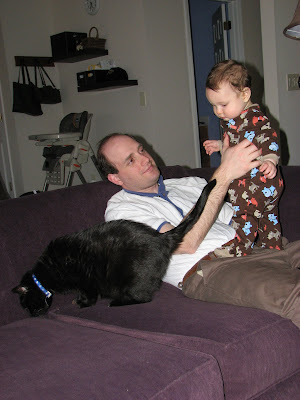 I'm glad Bendrix is more gutsy than me tho. That way we can still get our scritches and attention while they hold Joel. For a long time I wouldn't go anywhere near that thing. Joel just loooooves me. Whenever he sees me he smiles real big, claps and makes weird noises. Bendrix says that is baby speak for "Here kitty kitty, I won't hurt you. I just want to gnaw on that tail for a while." *shudder*


Note from Hendrix's mommy: No worries kitties! Joel is always being contained by me or the daddy and Hendrix/Bendrix is in no real danger. They are never allowed to get that close unless we are holding Joel. Joel could get a good yank and hurt Hendrix so we don't let them interact unless there is no danger. Hendrix/Bendrix kept rubbing Joel's outstreatched hand in these pictures and that is the first time he ever did that. I told him he is playing with fire!
Posted by Mr. Hendrix

That is sweet that they want to interact.

Oh it is good that they want to be friends, but you are right, Hendrix (and really Joel too) is playing with fire!

Bendrix, I think you are playing with fire!

Joel looks like a furry gentle little fella. We don't think you have to worry about him, Hendrix.
However, our mom has an 19 month old nephew and we are furry scared of him, he chases us all over the house. We do the hidey when he comes over.

Teri and her Stylish Cats said...

You are furry good pawrents to that lil tailgrabber...snoopervision is always good!

I wonder what Joel would think of MY FT?!?

Aw! What sweet pictures! It looks like you both like each other. :)
xo
P.S. Love Joel's outfit!!

Small interactions are grate!
Joel is getting really big.

Hey, Hendrix...tell Bendrix that if Tole pulls the tail both you and Bendrix will feel the pain!

At least you still have a tail to tell!

It is cool that Bendrix is helping you feel comfortable with Joel, Hendrix. My friend Lily, who is two, has spent her whole life being taught to be gentle with the kitty, and it looks like Joel is getting the same lessons. There are not many people in the world that I am comfortable with, but Lily is one of them. I think that says something about her lessons:)
-Suey.

You're a braver mancat than I am!

I think Joel will grow up to be a gentle boy and then he will learn that pulling tails is no no. This is working out great so far. They are going to be good friends soon.
Joel is growing soooo fast!

We would keep our tails curled tight around us (and from across the room)...