Kitty Did a Bad Bad Thing

oops. For the past three days, I've been hissing and swiping at the sticky little monkey boy. He is just relentless in his pursuit of me!

Mommy and daddy do their best to keep him back, but he has no concept of boundaries.

I didn't get in trouble, they understand I'm just defending myself, and my beans keep explaining to me that Joel doesn't understand what hissing means and that I have to be careful. They also remind me that I have a squillion places to go (many that are in the same "living area" so I'm not stuck off by myself in another room) that Joel can't follow and that sometimes I just have to retreat and go to those places.

It is hard though. They are talking with our animal communicator about the situation and she is going to communicate with me today while my beans are at work. She gave them some tips on how to talk to both me and the sticky menace. They don't want either of us to get hurt while Joel is learning how to behave.

The animal communicator is also going to ask me if I'm having any pains. I did have the swollen lymph nodes at my last trip to the VET and mommy and daddy want to make sure I'm OK. 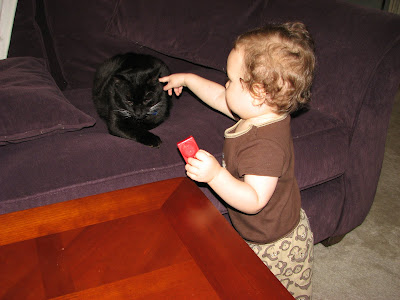 Note from Hendrix's mommy: we pushed the coffee table right up against the sofa so Joel couldn't reach Hendrix on what had been his favorite side. Where does he chose to plop down? On the end Joel can reach him! This is one spot he has hissed and swiped from. We have also walled off Hendrix's scratching post so Joel can't get to him but Hendrix can look out at the birdfeeders and still see all of us, but he refuses to use it (it is in the same spot, just blocked) 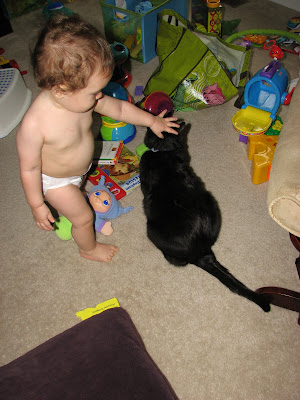 Labels: Can Joel have a PTU, I'm getting my cardio in for sure, I've had enough

Oh, sweetie. I am sorry you are having such a hard time right now with your bean brother. Come see me as often as you like and when you need to get away so that you don't stress out your family and you by hissing and behaving agressively. Listen to all the helpful tips they give you so that you can be a little happier. Maybe you need to watch some Housecat Housecalls with your mom and dad or ask them on line for help??

Hendrix, do I sense some ambivalence you might have about the human kitten? Can't live with him, can't live without him? Or are you trying to show him you are still in charge and can go where ever you want? You know, you still ARE top cat there - the human kitten isn't even a kitty, so it's no contest!

Sorry the little blurpy boy keeps getting to you...maybe you should stay on the side of the couch where the table is blocking. And stay away from the toy zone! We know about that place fer sure!

Ah Hendrix--getting those little humans trained is hard isn't it? I am sure an animal communicator will figure out what it is you are trying to communicate!

We think there's a power struggle going on here and Hendrix is determined to win! We hope the little sticky monkey gets tired of you Hendrix and just leaves you alone.....

Heh, doood, you're baiting him, aren't you? Buddah and I do that with each other. It's one of the few joys of having a sibling...bait and hope HE gets in trouble first...

I have a feeling it will all work out and you will get Joel trained in no time!

Hey Hendrix, how did your session with your communicator go?

We solved our problem of staying away from our blurpy girl by being on our perch, which keeps us up and out of her reach.

Wow, the communicator sounds pawsome. Hope she can help with the boundaries! Also, we hope you are not in pain. Sorry to hear about the swollen lymph nodes. Keep us posted!

Hendrix, poor guy, hang in there. I wonder if your bro could use a calming collar?

Mr. Hendrix, we sympathise. If you nap a LOT, the blurp will grow out of it. Maybe.

He will grow up, Hendrix and learn how to appreciate you!

Mr Hendrix you're just training the Joel baby. I know it.

We are happy we don't have sticky people here to deal with.

I think you secretly like having Joel around, Mr. Hendrix. You're a good and patient kitty!

Kevin and I want to thank you for purring for our kitty Maggie...She is doing so much better. Her appetite is back and she's getting to be more and more like her feisty self.

Hey Hendrix, has your mum heard of the book 'Tails are not for pulling'? Kate stumbled across it a few years ago. We're yet to buy a copy, but it looks pretty cute:http://www.freespirit.com/catalog/item_detail.cfm?ITEM_ID=356

Kittries has to defend themselfs at some point. But we hope Hendrix an the kid will adapt...

Sweetie, how are you doing? How was your communicator session? Have you watched Housecat Housecalls or contacted them yet?
Come tell me all about it.

We suspect Mr Hendrix is not quite as annoyed as he says he is. He seems to enjoy hanging out with the kitten bean.