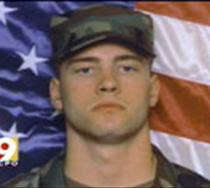 I'm not sure if any of you have ever heard the name of Staff Sgt. Matt Maupin , but it is a name familiar in our area. He is from Batavia, and area 30 minutes East of where we live and is where my Uncle and Aunt live.

On April 9, 2004, Maupin vanished after his convoy was ambushed in Baghdad. A video was shown a few days later where insurgents murdered a captured solder, but the footage was so blurry, no one could be recognized. After that no hints of of his whereabouts or fate were found. Until March 2008. A year after his disappearance, his family received word his remains had been found.

Through these horrible and torturing years, his family has been the definition of class and grace. They do not involve themselves in politics, they insult and blame no one and we will honor that and not say anything to slight anyone. Their only goal was to bring their son home and support the families of other missing soldiers. They possess a strength and grace we are sure no one in this house would have under these circumstances.

On Saturday, April 26th, Matt's remains will land at Lunkin Airport and tens of thousands of mourners (and we mean that) are expected to line the procession routes and pay their respects during the 20-hour visitation starting 11 a.m. Saturday at the Union Township Civic Center. 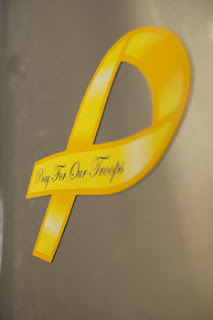 Hundreds of volunteers worked all week to tie them - to utility poles and fence lines, parking meters and hedgerows, redbud trees and guardrails - most 6 to 12 feet apart at eye level for the passing procession.

Members of the public will pick a spot along the way, bring a candle and light it as a tribute to Maupin and others. 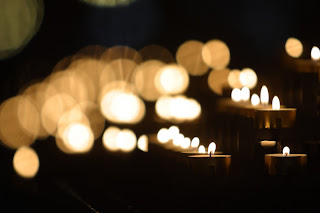 Demand to attend this brave soldiers funeral was so great, that the only place large enough to hold the 43,000 expected attendees is Great American Ballpark.

My mommy never leaves the house without her American Flag Pin, and tomorrow, she will add a yellow ribbon to it. My daddy will wear his pin and ribbon tomorrow too (he doesn't wear it daily like mommy). Although they will not be attending the services, they want everyone everywhere they go to remember a hero comes home tomorrow. And they want to say thank you, not only to the Men and Women in Green who serve the causes of freedom worldwide, but their families, who sacrifice so much. 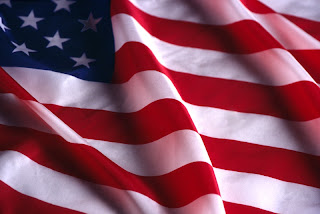 Welcome Home Matt, we are grateful for all you've done. Rest in Peace.

To read more about Staff Sgt. Matt Maupin and the amazing services being held in his honor, please visit the Cincinnati Enquirer's special section.
Posted by Mr. Hendrix

Labels: Honoring a Brave Soldier, Thank you Men and Women in Green

Man, I remember when he first went missing, and how hard everyone was hoping he'd be found ok. I hope there's gonna be a lot of tissues available when his remains get there, because people are gonna need them.

Hi Hendrix,
That is a very sad story. I am glad that he finally gets to go home.
Thanks for sharing with us!
Love Clover xo

I am glad he will be coming home. We will say a prayer for his wonderful family.

May God bless this special family.

We're glad his family will finally have him home...bless them for their Grace.

That story got me all choked up. I am glad Staff Sgt. Matt Maupin will finally be coming home.

The first thing I thought of was the last line from the movie "The Bridges at Toko-Ri":

"Where do we get such men?"

Purrrrrrrrrrs for Matt's fambly and alla the people in green and their famblies.

Very sad, but we are glad he is finally coming home and so many are prepared to honor him. He probably died with the same dignity exemplified by his family. Thanks for sharing this.

God Bless you Sgt Maupin. Thank you for all that you did. Rest in Peace, you most certainly deserve your Heavenly reward.

That is an amazingly sad story. And very fitting for us Aussie and New Zealand cats, who have just celebrated the sacrifices of our soldiers on Anzac Day. Thanks for your Anzac Day wishes, Hendrix! And God bless SSgt Maupin and his brave family.

Hendrix,
Thank you for sharing this story. Our mama was following it and was sad/relieved to hear that they finally found him to bring him home. A hero deserves to be brought home to a hero's welcome!
Our family is so very proud of every other military family in our country (and the supporters, like your family Hendrix!)

Thank you for sharing this story.

A heartfelt thank you to Matt, and to the Maupin family.

We are so sorry to hear of this sad news. We are sending healing thoughts and purrs to all who have lost loved ones in this war.

Thank you for sharing this with us.

Thanks for taggin us with the meme. Its all dun.

Thanks for sharin this sad story.

This is so sad I will pray for his family.

Awww, that made us Ballicai and our momma all leaky. We will keep his fambly in our hearts and purrs.

Kittyhugs and purrs from MaoMao!

We are sorry about his death, but glad that he is finally comin home...

An Awesome Tribute to a Brave Hero.
Well done, my sweet.

The Whiskers and Purrs Gang said...

Dearest Hendrix,
We is prayin' real hard for the Maupin family and all the wonnerful peoples that is in harms way just for us.

I am very sorry that this brave man died, but grateful that he will be coming home to his family. Four years is a long time to wait for this horrible news. My gratitude to all the Men in Green.

We are so happy this young man is finally coming home.Purrs for his family and for him. He was a brave man.
Purrs Mickey