So, Saturday I was abandoned again. My beans went to a local farm to run the Corn Maze, feed the farm animals and get pumpkins from the pumpkin patch. Mommy said they don't let kitties go there. I was NOT happy because, once again, I was not included. 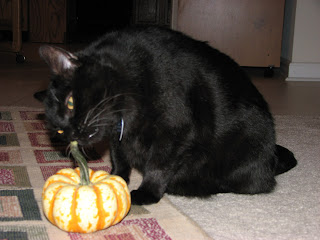 BUT, then it happened...they brought me home my own pumpkin! I've never had my own pumpkin before. I will love it and pet it and kiss it and squeeze it and I will call it George. So, they are forgiven...for now. 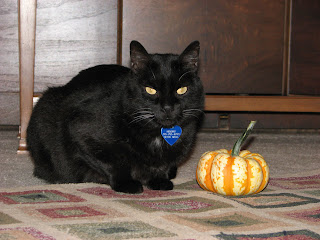 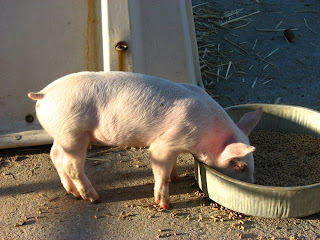 I posted this one especially for Miles.

Tune in tomorrow for Bendrix's Tattle Tail "Wasn't Me" Tuesday Extravaganza....there aren't many pictures...but you'll get the point

BTW, for those who saw Extreme Makeover Home Edition last night, that was our local family! The Elementary School (Hopewell) they showed is the one my daddy went to. We drive by it all the time. Also, the huge American Flag hanging on the building was not just for the show. They have hung a giant flag there since soon after the Sept. 11, 2001 attacks, and each year, put up white crosses to honor those who died.
Posted by Mr. Hendrix

Oh my gosh! Your very own pumpkin and it is the cutest one we have ever seen! You look so darling too in those pictures. We hope we will get our own pumpkins too.

How great to have your very own pumpkin. We know you will take good care of it

Oh my paws and whiskers! You got your very own pumpkin!

My mommy never shares her pumpkins with me . . .

SNORT! I love your George pumpkin! I LOOOOOVE that you posted a HAM for Miles! Hendrix, you're such a hoot. Oh, dude, sorry about the flea medicine..you're right, it's yuck, but oh-so-good for us.

We watched it! The lady bean gets leaky eyes every episode.
We like your pumpkin!
~The Creek Cats~

MrHendrix
How cool to have that house in youw neibhgowhood wif the gianowmous flag!
I love the pictoowe of youw vewy own pumpkin Geowge..just don't squeeze too hawd, hehehe
smoochie kisses
ASTA

Oh aren't you lucky. I also got my very own pumpking.

Mr H, I think yer display problim is becuz of the Bengals grafik yoo have in the footer. Ferst, try reemoving it and see if that fixes the problim. If it duz, then you need to reduce the width of yer Bengals grafik so it isn't wider than yer mane colum. Let me know if it werks -- if it duzn't, we'll investigate further!

Sorry about the no chili fur khat rule!

I khan't have any since Mom put onions in it!!

At least woo got a dear little pumpkin!!!

Hi Hendrix,
Aw, you are so cute with your very own pumpkin!! I sure hope I can get one of my own too. I will show my parents this post.
Speaking of my parents, I am SO MAD at them - they did not set the VCR to tape Extreme Makeover for me last night!!! I was so looking forward to watching it to see where you live. I really really hope it plays again soon so I can see it.
Love Clover xo

ohmygosh, Mr. Hendrix! George is very cute! We have never seen a pumpkin like that!

He's a cute pumpkin, Hendrix! Hope he lasts awhile for you!

Your very own pumpkin!?!? You are so lucky!

I don't understand how they can always leave you home alone, while they go out. At least they brought back George for you for this time.

Hendrix, your little pumpkin is absolutely adorable! You are one lucky dude to have one of your very own! Enjoy it furriend!
Purrs and headbutts,
Sabrina, Sam and Simon

Guard George well! Or should I say "gourd" George well? Chirpmonks always nibble our pumkins. Mom an boy wented to a corn maze a cuple weeks ago... maybe it was da same one?! Treinen Farms in Lodi. The maze was open but not da pumpkin stores. I wanna pumpkin!

That is a pretty cool present that your folks got you!! If you get abandoned it's nice to get cool presents!!!!
Purrs Mickey

That is a very nice pumpkin! It will look very nice in your Halloween Village.

I have neither a Halloween Village or my very own pumpkin named George - I am going to "talk" to my Mum about this travesty.

Love your pumpkin!! But if your momma starts talking about "pies", get it to safety RIGHT AWAY!!!!!

A Golden Pumpkin for a Golden eyed boy eeer man.

Did it taste yummy?

We love halloween! Will you be craving your very own pumpkin towards the end of this month Mr. Hendrix?

That is so neat to have your own pumpkin. I never have had my very own/ I guess I could say the one outside on the front porch is mine but I think it is for all in the house.
Congrats on your award the other day. You are so deserving and it is such a lovely award to have displayed. I also want to thank you for passing it on to me. I am honored and I will display it proudly on my blog.

What a cool punkin!

O, Mr. Hendrix, how neat to haf yours furry own pumpkin. Nice pickshures, too.

We are so glad your parents got you your very own pumpkin!!!
Purrs
MrSippi, Carolina and Mama