The story of a former feral's name...

I know it is early, but since my mommy is back at work now (I'm really missin' her and she misses me too!)she is so busy she might not get to post my former feral post tomorrow. So, here it is a few hours early....

A lot of people have asked about my name and whether I have a first or middle name. Well, that is an interesting story.

Mommy found me on the side of the road on a freezing cold November day on her way home from work. I was a feral, totally skin and bones and wanting to trust but having a lot of trouble with it. I was also facinated (and a little unnerved) by sounds from the TV/Stereo speakers. I love to sit on the subwoofer!

Mommy & Daddy always thought of kitties as being slick and cool, but at the same time, crazy and fun. What ties all that together better than rock and roll???

Being big lovers of the "classic rock" era (the Who, Tom Petty, The Rolling Stones, Jefferson Airplane - the Woodstock Jefferson Airplane not the "We built this City" "Starship" one! - etc) and of course the "rock n roll trifecta" of Jim Morrison, Janis Joplin & Jimi Hendrix, this is the first place they looked to when they were picking out a name for me.

Anyway, since I'm a boy, Joplin was out, Daltry didn’t seem wild enough as a name, other bands like the Stones have typical bean names (though "Jagger" was kicked around since I love to run around like crazy), and Morrison, and versions of it seemed to much like Morris the cat.

I am a "cool cat" so "James Marshall Hendrix" it was. It was a mouthful so I went between "Jimi" and "Hendrix" for a day or two, but when they took me to the VET, the Vet Tech called "Mr. Hendrix," and that sounded so good, it stuck.

Not only is my purrsonality is as rock and roll as it gets, Mommy says Jimi Hendrix was a rock and roll god...and what do we cats think we are?????

I love to run around when mommy and daddy have concert DVDs on (they do this alot when they clean) but for some reason, the Who is for the couch. My daddy captured my typical the Who concert watching pose a few months ago. Before you ask...it is Baba O'Riley that is the fave...can't help but sing along and twitch my tail to the beat... 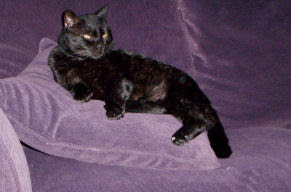 As for my namesake, a favorite is hard to come by, but Mommy thinks, "the Star Spangled Banner", because the way he played it....it is an awesome song to begin with, but, wow, the way Jimi played it.....untouchable...

On that note...I think my new theme song (to be played when I enter any room should be:

Listening to you, I get so hungry

Gazing at you, while you try to sleep

Following you, into the kitchen,

See Me, Feel Me by the Who

You are totally HENDRIX!

P.S. - we know you guys at the Cat Blogosphere are having some difficulty repurrting the news, so we did an intoduction of the ArtsyCatsy cats on our bloggie also!

Wut a neet storee. Mom and Dad used to live sort of close to where Jimi grew up. The howse was sold, but they can't remember exactly wut happened- if it was moved, etc. We will ow think of that when we heer yur name.
LOKi

that's a great story, and we most especially love your theme song!

I find it fascinating to learn how other cats have come by their unusual names!

Memories of Eric and Flynn said...

Dat wuz grate heering how yoo got yer name an it reely soots yoo. Mum sez she likes Jimi Hendrix too an she's gonna play sum of his moosik furr us.

Oh we're so boring. I was named Pearl because I'm mostly white and Pumpkin was named Pumpkin because... he's mostly orange.

I can't help but feel a little cheated. I probably should have been named Joni or Judy or maybe Janis.

That is very cool how you got your name, Mr. Hendrix. Mom likes your namesake too. My name was supposed to be Milo, but when I adopted my beans, I whispered to Mom that my name was really Puff.

Yeah! That's a great song fur you! The lyrics are purrfect.

But, do you have a nickname? Should we call you Mr or Hendrix or maybe Jimi or do you prefer your full name, Mr. Hendrix?

I LOVE you song, Mr Hendrix! Can I use it too?!? ~Persephone

Hi buddy, how are you doing? just stopped to say a warm hi to you..

Mr Hendrix is a very good name with a nice story behind it. (And nice humans who did the rescuing) My human gave me a name that's also a female name, and people would meet me and say, "Oh, Kelly, she's so beautiful," when I'm a 20-pound tomcat. So now when we meet new people, my human introduces me as Mr. Kelly. Much better, much more dignified and respectful.