This was a very crazy weekend at my house. On Saturday my beans were gone ALL day. They went to see beans in costume that do funny plays and sing songs and get all dressed up. They saw this bean there. 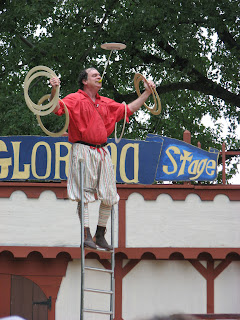 He reminded mommy of Ayla's climbing skills. I don't think he climbs as well as Ayla tho.

Then they rushed home, cleaned up and went to a "Function" for daddy's work. They were out late!

Then on Sunday when it should have been all about ME and going to Jack's party. All my stuff got moved around. My sofa, my window box, my scratching post. 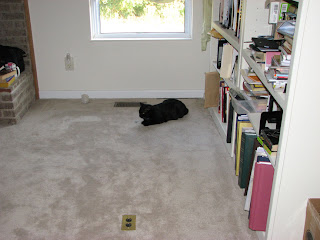 That is right kitties. Mommy shampooed all the carpets and couches! That meant I was forced to stay in the Mancave (which usually is fun) but the Bengals were on and, well, it was not where I wanted to be. 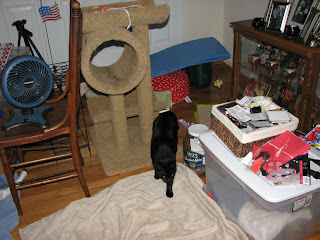 Just as Bendrix was about to show his extreme displeasure in the events that were unfolding, it happened...

Can anyone guess what turned my House Panther mood around? Here is a hint! 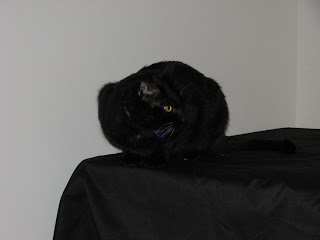 PS Why did the chicken cross the road?


Because the Bengals Defensive Line couldn't stop it.


UPDATE: I almost forgot! One of the greatest shows ever starts its second season tonight. Life on NBC. Clever, interesting, funny and sharp. It starts at 10pm right after Heroes. Anyone who loves Nelson DeMille books will love this detective. He has a lot in common with John Corey. Watch all the first season episodes on nbc.com/life
Posted by Mr. Hendrix

Labels: Midnight Monday, One of my favorite things got put up yesterday

Boy oh boy, Hendrix, the beans being gone all day Saturday was bad enough, but to have ALL of your stuff moved on Sunday, well that is just preposterous! We are lucky that we don't have carpets to clean ... hee hee! And we have no idea what peaked your interest, what was it???
Purrs and headbutts,
Sabrina, Sam and Simon

Wow, no football teams seemed to do well this weekend

Yeah, and the Cowboys got the cowpatties beat out of 'em by the Redskins! What was that? What a weekend!

Sorry about the Bengals, but this may be the only game the Browns win all year, so we are happy.

Unknown said...
This comment has been removed by the author.
12:40 PM

Geez, Hendrix...you sure didn't have a good weekend...

pee ess. okay...we can't guess what changed your mood though...

That wos one cwazy weekend. I hope efurything has been westored to its wightful place.

HAHAHAHAHAHAHAHA! I LOVE your joke, Hendrix! That is too funny. I watched that game in amazement on sunday too since I live in Cleveland. Poor display on both sides, dontcha think?

We hate it when our beans move our stuff around too, although we do like it when they make the bed and we get to hide under all the sheets and mess it up again as they are tyring to make it all perfect!

Wow, that guy on the ladder has good balance! I dont think I could balance on a ladder like THAT...

Oh nooooooeeeessssss all yer smell is now gone, acuz she washed it! I hope yoo gotted to put furs back on it all too!

Yoo sented me sumthin?? I never gotted mail before by myself! I can't wait to see what it is! Fank yoo!!

Was it a mouse? or a cockroach? Or just a fly walking across the sofa? Or a sunbeam? I want to know what changed your mood.
George

I don't know. I guess it has something to do with football, but I don't follow football.

I'm sorry you had such a bad weekend. Don't your beans know, weekends are for staying home with the kitty!

Did you get some treats Hendrix? Is that it? Chicken treats?

Did she put up your village???? Is that what made you feel better?

Sorry about the carpet, dude. That sucks. Now you gotta spend all that time putting your furs back on everything. You're going to have a busy week.

I was thinking the same thing as EG, Hendrix. Is it your village? Do you have a Hallowe'en village?
Hope you have a great week!
Love Clover xo

What a weekend!! We bet you thought you were having a terrible terrible nightmare ! We hope everything is back to the right side today!

Mum loves the show Life. She will be watching, so I guess I gotta too. She has to record Boston Legal since they are on at the same time.

So what changed your mood?

How many times have I had to say it? Hoomans should reconfigure the environment around us!!
But Mancave? Hmmm, that sounds way cool.

I'll bet the chicken crossed the road... to get to your mouth!

Oh man,I hate when Mom wants to do that cleaning thing!!!!!!!
On top of that your team :(
Maybe you can snuggle when your Mom's show is on ;)
Purrs Mickey

Woah! There sure is a whole lot of action alays at your house!
No wonder why Bendrix likes to visit often!
You must practice your puurrring and sleepy eyes and maybe theyz might slow down and take more naps with you :))

"Man Cave" was a term invented by the HGTV Network. Find out the real deal at www.themantuary.com