You've all seen my birdies and squirrell friends who come in my yard and up on my deck. Well, these past 2 weeks have brought a very unusual visitor. Why unusual? Because it comes during the day. 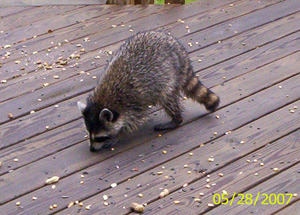 It is also unusual because it has no real fear of humans. When mommy and daddy had company over and they were on the deck and in the yard, the little guy/girl just sauntered right up out of the woods and started munching the seed under the feeders. It also loooooooves the peanuts mommy puts out for the squirrels. It also passed 30 feet from mommy while she worked in the garden. It doesn't show any aggression at all.

At first mommy was concerned it was sick or hurt because it came during the day, but after 2 weeks, it shows no signs of disease so she is just letting it go (the police will come out and "take care" of any diseased racoons). Before you worry, no one near our house has woofies that we need to be concerned about. The woofies live up the street. Also, all the cats in our neighborhood (we have 36 houses in it) are indoor only so we aren't worried about that.

Mommy hopes it eventually goes away, but for now we'll leave it alone. She thinks cause it is young & smaller than the other racoons she has seen (bird feeders = racoons), it is hungry and doesn't want to fight with bigger racoons for food so it comes during the day. These aren't the best pictures cause it was rainy and through the window, but he is kinda cute, even for a mean racoon. 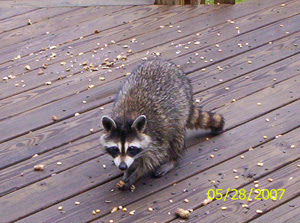 PS Marie the Defender tagged me for the confessions Meme so I'll be doing that tomorrow. Like KC, I'm having trouble thinking of anything to confess...
Posted by Mr. Hendrix

He sure is cute.
Just watch him real close and don't let him take any of your food!

Our momma and daddy had a baby racoon come to there patio during the day last year, and momma feed it a banana. Thanks for visiting our blog!

What a cute racoon! Grandma used to have a whole family visit her. She didn't mind, though, she feeds whoever shows up...

Who is that masked bandit? I am a little scairt of him.

Well, that raccoon would certainly be interesting to watch! We only watch birds, squirrels, chipmunks and bunnies!

He sure is tiny, I think your Mommy is probably right about the whole eating thing. He's cute. His little face is adorable.

How ya been? Sorry about the ears but you're right, hide better cause they can see you even we you can't see them!

Wow. You may soon have a raccoon brother?

That's a funny lookin' kitty on your deck.

If you can't think of anything to confess, maybe Bendrix can.

oh he is soo cute. I wonder if you can tame him? You could train him to be the first racoon blogger! xx

He is cute - but we knows them guys have fierce claws!

Great scott, whatta funny critter! we've got one of those that comes to our back porch, too -- sometimes we see him through the back window and he really freeks us out.

Kittyhugs and purrs from MaoMao!

Hi there Mr Hendrix. It was very nice of you to stop by...I see by your profile that you're pretty used to coming up to humans.

Alas we are no longer watching Rose as her mommy came home on Monday night. Darly is kinda sad about that. She had a great time playing with her.

We saw Rose's mommy's sister today and gave her back the housekey. The sister (no, not the poodle) said that they were all very glad that we helped take care of Rose while they were gone. It made the mommy feel better to know that someone would be playing with Rose while she was gone.

Rose doesn't mess with yarns & string unless they are moving...but I'll mention your & Kukka's warnings to her mom. She likes fast moving toys the best.

Thanks again for stopping by...we have one wolfie & two rabbits at our house...the rabbits don't talk much.

Hmmm, I neffer saw wun of THOSE afore. We don't haff them in Hah-why-eee. That's good cuz I herd that they can carry rabies which is a vury bad dezeez but we don't haff that in Hah-why-eee too. Poodins and woofies who came to Hah-why-eee used to need to go to qwaranteen jail for up to 120 days but now, if they haff a microchip, had all thare rabies shots, and had blood tests to proove they haff enuff rabies antibodys in thare blud, they can leeve the airport rite away.

One of those pooped on my Mommy's sleeping bag a long time ago. She has never forgotten that.

Donny and Marie and Casey said...

The racoon is real cute. Does he talk to you through the window??

Mr. Hendrix, there isn't another catbed, but Casey loves sleeping on the fleece throw in the living room. Or at the foot of the bed.

we've never seed one of those in our yard before, but our mom saw them at our gramma's house. be careful he doesn't put the bitey on you, your mom or your dad!

Oh... I want one! And a squirrel too. That racoon's tail looks a bit like mine. You have the best backyard wildlife over there in the states. Do racoons have big scary scratchy claws like Australian possums do? Where we live, I don't see any possums or kangaroos or wallabies or Tasmanian devils. Just your average birds, mice and rats.

Zoey and the furballs said...

Wow, he's really brave to be coming during the day. They are lots of fun to watch, but only through the window. They used to come in the house through the cat door at our old house. They wanted my food. Mommy had to start locking the cat door and keeping us inside.

Wow, that is a big animal. Why is he wearing a mask? Is it a fashion statement? Was he burned with acid or something?

Mr Hendrix, Hi! Could you contact ML/KC by email please and mention my name, they have lost your email address and need to contact you.

Around Your Wrist said...

wow, mr. hendrix...you're lucky to have someone so handsome visiting you. still, i'm glad you're inside and he's outside.